The accusation of “greasy grace” is prevalent among those who resist the message of grace! The term has been adopted by those who feel the message of grace somehow promotes an irresponsible lifestyle or what some call “easy believism.” In fact, some feel they must attack what they believe to be a destructive error in the body of Christ! But their accusations are not new; they are, in fact, as old as the Gospel itself!

The accusations against the proponents of Grace have been around since the Apostle Paul declared it. He too was accused of promoting sin and reckless living. Listen to what he said, And some people even slander us by claiming that we say, “The more we sin, the better it is!” Those who say such things deserve to be condemned (Rom 3:8, NLT). Almost 2000 years ago his detractors assaulted him with the same accusations that are being leveled today. In his case, it was often the Judaizer, the legalist who believed on Jesus but rejected faith righteousness, that attacked and slandered this Gospel.

The starting place of unraveling the conflict over the grace message begins with a Biblical definition of grace. Religion has narrowed the application of grace to something that only occurs at the new birth. By so doing they narrow the definition and what we expect from God. The current accepted definition of grace is simply unmerited favor. This is not a wrong definition as much as it is an incomplete definition. According to the best resources available grace has a very broad meaning of divine favor, power, ability, capacity, strength, influence on the heart, that which causes joy, and that which comes by unmerited favor.

In Romans 5:1 Paul identifies grace as that which makes us able to stand. Throughout his writings he closely links grace with faith righteousness. When we accept righteousness as a gift from the finished work of the Lord Jesus, we then realize grace is the power and capacity that works in our heart and gives us the power to stand, or live in that righteousness. This becomes even clearer as Paul emphasized in the book of Galatians that apart from grace we are left to seek righteousness in our own strength. Apart from grace our only option is what the Bible calls dead works. Dead works are not the bad things we do, they are the good things and the religious things that we believe will make us righteous; which is synonymous with the rejection of Jesus. After all, if man could have been made righteous by his strength he had no need for a Savior, therefore Jesus died in vain! If righteousness comes through the law, then Christ died in vain (Gal. 2:21).

For all these centuries the battle against grace has actually been an argument in favor of legalism, although many anti-grace people would never see themselves as legalists. It has been a lack of faith in the finished work of Jesus and His ability to work in the hearts of believers. The argument always sounds noble, after all, how could one be wrong if they are battling for people to live more godly lives? They even insist on living this more godly life for the glory of God! But that is the issue! Righteousness accomplished by our works does not glorify God; it glorifies man and counts as nothing the blood of the Lord Jesus!

The Apostle labeled works righteousness as a horrendous heresy worthy of the worst punishment from God (Gal 1:6-9). While making men religiously pious, it actually separated them from Christ. In Galatians Paul makes it clear that this is the work of men who do not believe the Gospel. Their primary motive is clearly the desire for the control of others! In 1 Cor. 15:56, Paul clearly warns that law, the attempt to be made righteous through personal effort, is the power of sin and it alienates us from grace (Gal 2:21), the only power able to overcome sin! If grace is God’s ability and power to live in righteousness we must look in faith to the power that raised Christ from the dead to raise us up in this newness of life!

In Paul’s case, his attackers had absolutely no excuse. They were blatantly opposed to the work of Christ and the New Covenant. Unfortunately I cannot say the same for those who consider themselves to preachers of grace today. Many who preach “grace” seem to be confused about its Biblical meaning and its inalienable connection to faith righteousness! Some water down the message of grace. Some mix it in with heresies like Ultimate Reconciliation and Inclusion. Many years ago, while conducting several meetings with a fellow minister, I would have people come to me after the services and say, “When Brother _______ preaches I feel like it’s alright to sin, but when you preach I feel like I can overcome sin.” Too often supposed grace preachers leave the believer feeling that sin has no destructive power. Nothing could be farther from the truth.

The reason we need grace is because it is the only power that will deliver us from sin and its destructive power. The wages of sin is death (Rom 6:23). God sent Jesus to deliver us from death, by delivering us from the power of sin. But He also came that we might have life to its fullest! That doesn’t happen just because we are delivered from sin. It only happens when we live in the power of righteousness! Apart from grace we are no more capable of winning over sin as Christians than we were as sinners. Those who seek to alienate us from grace unwittingly bind us to the power of sin by alienating us from the power of righteousness!

A major confusion concerning the message of grace is when ministers use it synonymous with mercy. When grace and mercy are presented as synonymous one gets the idea that grace is not God’s power to get you out of sin, but instead His ability to overlook your sin. Thayer’s Lexicon gives this as a definition of mercy: kindness or good will toward the miserable and afflicted, joined with a desire to relieve them. Eph 2:4-5 says, But God, who is rich in mercy, because of His great love with which He loved us. God is compelled by His love to deliver us when we struggle with sin, thus He offers grace: the power, ability and capacity to live in righteousness, given freely and with no merit of our own! It is all about God and His loving nature! However, when mercy and grace become synonymous there is compassion for those who fail, but there is no power to overcome!

When mercy and grace are seen as they truly are, we have the perfect picture of a God who always loves us, but is always calling and empowering us to break free from the power of sin. Mercy and grace are both indispensable realities. Because God is merciful when we do not deserve it, He continues to offer us grace, i.e. the power to overcome sin by the power of righteousness.

Regardless of those who abuse the message we cannot use that as our excuse to reject any aspect of the New Covenant. To do so reflects a deeper corrupt motive. Maybe it comes from the need to protect our doctrine. Possibly, we am more concerned about our egos than we are the truth. Or perhaps it is an issue of codependent control. The message of grace will make people depend more on God than on me and I may no longer be the hero. I will lose my ability to control their life. Regardless of the reason the abuse of a message by some never gives us the right to reject the message!

But there is an even bigger picture. There is more at stake than we have imagined. Grace is the power to live, do and be all that God has promised in the Covenant that was established in the blood of Jesus. Salvation is far more than just the “born again” experience. The word salvation means, saved, healed, delivered, blessed, prospered, protected, made whole, set apart and all else that comes to us in Christ. Eph 2:8 says, by grace you have been saved through faith. So now we realize, I am saved, healed, delivered, blessed, prospered, protected, made whole and set apart by grace! Without grace I have no capacity or power to experience any of what God has promised. Everything God offers me is a work of God’s grace that I receive by faith. Apart from grace I am alienated from healing, prosperity, peace and the thousands of promises that belong to the believer.

Those who preach grace as mercy, or any hint of irresponsibility must repent and publicly correct their erroneous doctrine. Likewise those who oppose and speak against grace must repent of their doubt and publicly rectify their error. Both sides of this conflict are destroying innocent people who are looking to us to point them to the Life promised in the Lord Jesus! And we all should seek to know and experience God’s grace by first believing in the gift of righteousness offered to us in the Lord Jesus. Then, we should expect God to manifest His power of righteousness in us! This is the power and hope of the Gospel preached by the Apostle Paul and promised by the Lord Jesus!

Regardless of our reason, resisting the doctrine of grace is tantamount to resisting God. There is no separating God from His word. The Psalmist declared the connection between His Word and His name. For You have magnified Your word above all Your name (Ps 138:2). When any truth is presented in the Word of God there really is no option but to accept it, believe it and allow God to instruct us in its application.  Regardless of our confusion or opinion, if Jesus is Lord, and if we are believers, we will trust and submit to His Lordship, and we will give ourselves fully to the truth. 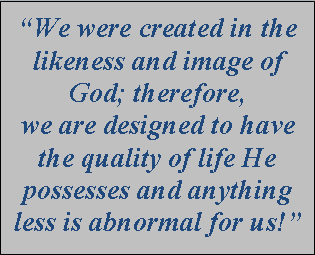 What is the real key to experiencing the life of God?

Ashamed of Which Gospel?