When my husband and I argue we never solve problems; it always gets worse: help! 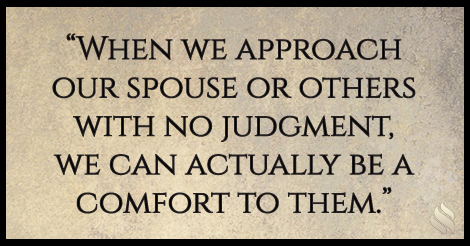 After nearly a half-century of counseling and ministry, I have found that few people actually argue about the real issues. They argue about the judgments they have passed about the issue. For example, your husband comes home  and isn’t as talkative as usual. Rather than ask him what’s wrong, you may assume he’s angry about something. After you “stew on it” for a few hours, you assume he’s angry at you. Then you approach him with, “Why are you mad at me?” Now the argument will be about the judgment you passed. Your husband is forced to defend himself, and you never deal with the heart of the matter.

When we approach our spouse or others with no judgment, we can actually be a comfort to them. Even when they don’t want to talk about the problem we can bring peace and soothing, instead of more conflict.

JOIN ME this week and I’ll help you put an end to useless arguing by teaching you how to get to the heart of the matter.