I hear you talking about a war on my faith. What does that really mean? 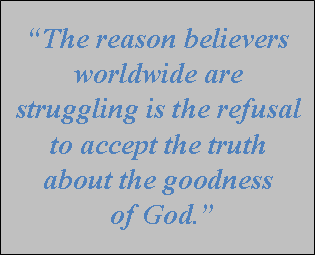 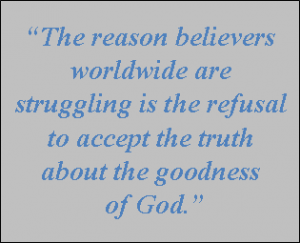 Religion would have you think the war on your faith is merely the temptation to sin, but sin is when we see ourselves as less than the Word says we are. Unbelief is when we see God as less than His Word says He is. The reason believers worldwide are struggling is the refusal to accept the truth about the goodness of God. When I traveled in circles that were more steeped in religion people came “unhinged” when I preached about the goodness and love of God!

The average believer has spent his or her entire Christian life hearing messages about how God will punish you and drag you through trials and tests. When something good happens in their lives they attribute it to luck, but when something bad happens it’s God. We have all struggled with the Luciferian gospel (which is no gospel at all.) It is the message of an angry, wrathful God always seeking the opportunity to strike out against our failures.

Besides hundreds of Scriptures that negate that message, the only place we really have to look is at the life and ministry of Jesus. He was God in the flesh and He was the Word in human form. When we look at Him we see God. He came to set the record straight about the character and nature of God! Since we don’t see Jesus condemning, testing and putting sickness on anyone we cannot assume that God would do those things.

Jesus said up until His coming violent people tried to take the kingdom by force. He also said there’s a way that’s easy and light and it will give rest to our very souls. To find that way we must take up His yoke. The yoke is the interpretation the teacher presents as what God truly intended and implied in His Word. Join me in Impact CyberChurch this week and start making the shift from seeing God through the doctrine of Religionists and start seeing Him through the doctrine of Jesus.