Will the Church establish God’s Kingdom in the earth? 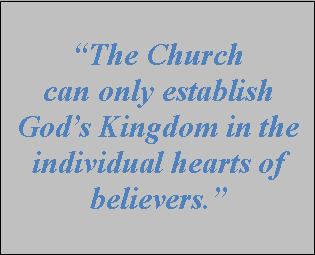 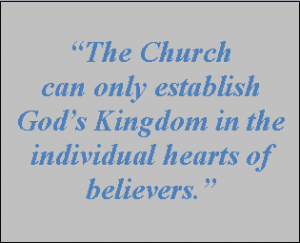 No! The Church can only establish God’s Kingdom in the individual hearts of believers. The destruction of Israel came about, in part, because they wanted the Messiah to come, make Jerusalem His headquarters and rule the world through the nation of Israel. They wanted a political solution to a spiritual problem.

Many believers have different doctrines and philosophies about the Church taking over the world on Jesus’ behalf. There’s really no Scripture to support that idea, but there are hundreds of Scriptures that tell us Jesus will personally return to gather His children and we will fight beside Him to overthrow the antichrist and his followers.

The way we expand the Kingdom is by influencing people to become disciples. I didn’t say “converts,” I said “disciples.” Converts don’t advance the Kingdom of God in the earth. They aren’t living their lives based on God’s Word which produces the evidence of God’s love, wisdom and kindness. Jesus said He would give His glory to those who were one with Him and the Father. This glory is not a position, it’s a manifestation of God in those who live godly.

God wants to manifest His love in every person and that starts by believing on Jesus as Lord, then becoming a disciple who truly follows the teachings and the way of life taught by Jesus. That influence will manifest the Kingdom and draw men to the light!

Political victories will give us more time to influence the world and allow us to live in peace, but a political victory is not a victory for the Kingdom. To discover more about Establishing the Kingdom click here to see this week’s message!