How do you know when you’re in judgement or wisdom? 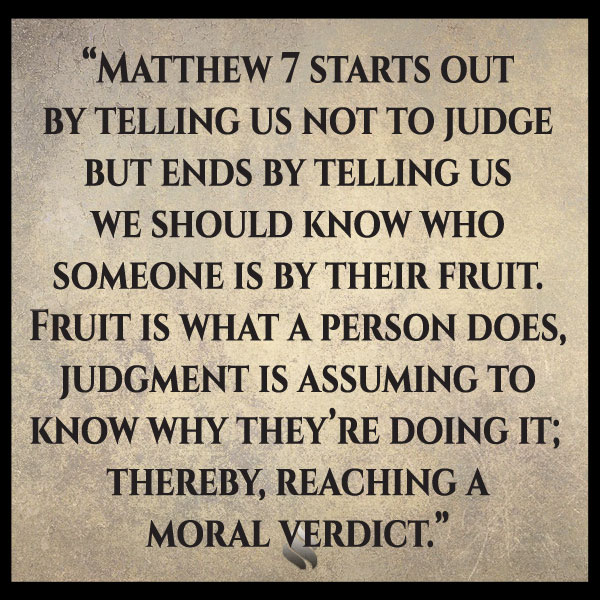 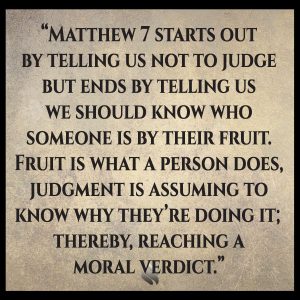 I see so many posts on Facebook by what seem to be well intentioned people that sound very loving but actually promote confusion and are contrary to Scripture. It seems there are a rash of believers who have taken on the radical left’s definition of judgement. In fact, there are an inordinate number of Christians who define love based on liberal concepts that are actually rooted in iniquity (the rejection of God’s morals, values, ethics and standards) and replace them with humanistic philosophies.

Don’t misunderstand me; I do believe the Church has historically been very judgmental. But our overreaction to past religious behavior leads us to destruction as sure as their unscriptural behavior led to their destruction.

Fruit is what a person does, judgment is assuming to know why they’re doing it; thereby, reaching a moral verdict.

Matthew 7 starts out by telling us not to judge but ends by telling us we should know who someone is by their fruit. Fruit is what a person does, judgment is assuming to know why they’re doing it; thereby, reaching a moral verdict. The Bible also teaches, in principle, the only thing we can expect of someone is what they have repeatedly done. Those who reject God’s wisdom and lose their money to someone with a bad track record find themselves broke, in a counseling session, blaming God for not protecting them. Those who marry people with a bad record in relationships are rejecting wisdom. Then they seem so surprised when the person is mean or unfaithful to them. Even more shocking is when we are surprised that the person who gossips to us about others gossips about us.

I am not saying it is our place to label people or call them names. We want to love them and seek to help them, but always walk in God’s wisdom. We should never trust them beyond what their track record says. We should hope for the best but know they will probably repeat their pattern. We can accept them as children of God with problems, but that doesn’t mean we should ignore their past. We want to give people an opportunity to establish a new track record without enabling their problem. But extending trust where none has been earned is foolishness.

The person with a bad track record needs to realize one of the first laws of recovery is to own your problem. If you can’t call sin what God calls it, you’ll probably never overcome it. Then you must take yourself on a journey of transformation. If you blame, defend or want to fight about terminology you’re not ready to deal with your issue.

If you blame, defend or want to fight about terminology you’re not ready to deal with your issue.

Confessing sin means to say the same thing about it God says. So the great paradox of transformation is to be able to clearly and specifically own your sin, call it what God calls it. This is the only way you can put it off, i.e. send it away. But you don’t stay there; that doesn’t become your identity. Remember, confess means to say the same thing. I have to begin to put on my true identity in Christ, ie. who God says I am.

After recovering from a personal failure in my life I remember as I owned it in my heart before the Lord I had to make a determination. Everyone has the right to react to me or say about me anything they want to say. I have no right defending myself. People did say a lot of horrible things, much of which was not true; but that was their right. All I could do is be who I really was in Jesus and, in time, I would outlive my failure and their judgment!

Own your stuff; don’t defend and correct. Put on the new man and let your light, i.e. your manner of life, shine before men so they know who you are today.