What’s So Good About the Gospel?

For thousands of years sincere people labored futilely to live up to the perfect requirements of the Old Covenant Law! The Law of Moses became the agreement around which man would relate to God; thus began enmity between God and man: God’s wisdom versus man’s logic, trusting God’s love or trusting our own fears!

God made a covenant with man through Moses. The benefits of that covenant were contingent upon man’s ability to live up to his end of the arrangement. According to Deuteronomy 28, when man fulfilled his part of the arrangement he was qualified for the blessings and when he failed he was disqualified and fell under the curses of the law.

There was, however, one major glitch in this system that no one wanted to face. By the works of the law no flesh was justified in the sight of God. (Gal. 2:16) In other words, no matter how well you performed or how close you came, you still fell short! As if that wasn’t enough, if you offended any point of the law, you became guilty of all the law; after all, it wasn’t the law you violated, it was the law giver. (Ja. 2:10)

By the time Jesus arrived on the scene the religious community was divided into sects and denominations who, in their attempt to teach everyone how to do enough to gain God’s favor, had more than 600 rules that had to be observed every day. By that time people were fighting more over the rules they had made up than actually trying to do what God said!

This entire attempt to “do right” was the basis of the covenant/contract God made with the children of Israel through Moses. It constituted the terms of the arrangement. Because it was impossible for anyone to live up to the terms of this arrangement it is a covenant of condemnation. As the apostle Paul said, it didn’t have the ability to make you righteous; it only had the ability to make you aware of your shortcomings! (Rom. 3:20)

The law was a school master to prepare us for a NEW, DIFFERENT COVENANT. (Gal. 3:24-25) The total impossibility of the Old Covenant should have prepared all who were honest with the fact that they needed a Savior and not just a savior who would forgive them of their sins. What good would that be? It would only be a matter of minutes and we would have committed a new sin and needed a new savior. We needed a Savior that would bring us salvation by giving us righteousness as a gift. Only by righteousness being a free gift could this be sure to all.

Jesus obtained righteousness with His faith. (Rom. 3:21) It’s part of the inheritance we receive “In Him!” We participate in this inheritance of righteousness by believing that God raised Jesus from the dead and confessing Him as Lord! (Rom. 10:9-10) At that moment we are baptized into Him and become joint heirs (recipients) of all He has received from God.

What’s so good about the Gospel? We receive, as a free gift, all the promises of God (2 Cor. 1:20) and we are qualified for those promises (Col. 1:12) through the finished work of the Lord Jesus! When everything is a gift all we can do is believe it, be thankful, and fall in love with such an incredible loving Father!

Join me in Tulsa, Oklahoma May 16-19 for four incredible days of discovering more of what’s so good about the Gospel. Click here for details.

I’m struggling with some instability and some of my friends say I might need deliverance! 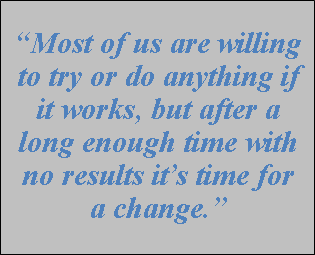 I have lost confidence in my prayer life!